So I was on Amazon the other day, looking through movies to watch, and I saw JIGSAW…so I added it to my watch later list. On Friday night I decided to watch it right after eating dinner, with some leftover tomato soup, which turned out to be a bad idea during this movie. 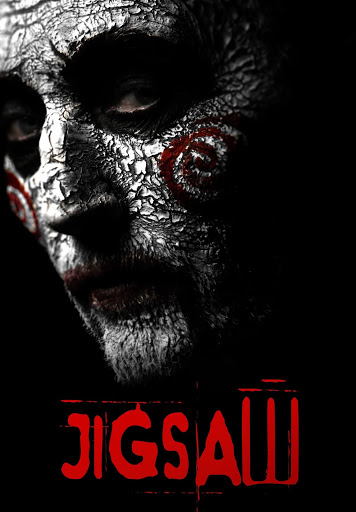 Jigsaw starts out with a car chase. The police and Detective Halloran (Callum Keith Rennie) eventually follow Edgar Mansen (Josiah Black) to the top of a building, where he grabs a bomb and tries to tell them that he has no choice. That he does not want to die. Not going to spoil this part. Needless to say, it’s tense!

Moving on, the movie takes the viewer to a room with five people Anna (Laura Vandervoort), Ryan (Paul Braunstein), Mitch (Mandela Van Peebles), Carly (Brittany Allen), and some other dude who we can’t see because he’s completely passed out. They have metal bucket things over their heads and chains around their necks attached to the other side of the wall, which has several buzzsaw blades sticking out of it (not good!) All of a sudden a voice reveals that they are all bad people that have done something really wrong and they are here to confess or they’ll die.

That’s where the usual SAW franchise “fun” begins, with each person facing a seemingly impossible decision that either saves them (temporarily) or kills them immediately. It gets gruesome!

We also get a bunch of scenes with morgue worker Eleanor Bonneville (Hannah Anderson), who has a secret room filled with torture devices (totally not weird at all.. she’s just really fascinated in these things…okay!) Also there’s Detective Halloran, who I talked about before, and Logan Nelson (Matt Passmore.) In the end you find out who the killer is—it’s obviously Jigsaw (Tobin Bell) because that’s the title of the movie…but is that really all there is to what happens in the movie? Okay, that is all I am going to say, I really don’t want to spoil anything which I probably would if I continued so I’ll stop there.

Pros: the way these people have to think of solutions in the moment quickly, because their lives are at stake interests me.

Cons: I don’t know about anyone else but when they all wake up in the metal room with chains and buckets I really started freaking out. You really start to think, oh god what if that was me and I woke up there? Which I do not like to think about and it really scared me, but once I got into it, it wasn’t that bad. Maybe this is a PRO, since I had such a visceral reaction.

Final Take: On my horror fanatic movie scale I rate Jigsaw with 96/100 spine-chiller points. I recommend this if your into very gruesome, chilling, interesting movies, but if you are squeamish when it comes to blood and guts don’t watch…

That’s all for this review of Jigsaw! Tune in next time for another horror movie review on PRIME TIME HORROR