Hello and welcome back! 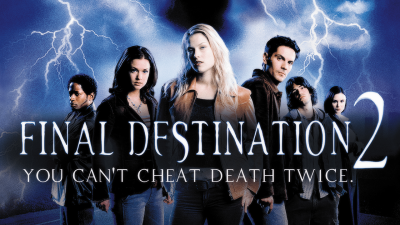 This edition of prime time horror focuses on Final Destination 2. The second movie in the Final destination franchise!

As I said in my review of the first FINAL DESTINATION film, my friend Emily and I watched the first movie at a sleepover one night. The next day I ended up finishing all of them!

This movie starts out with Kimberly Clark (A.J. Cook) and her three friends Shaina Gordon (Sarah Carter), Frankie Arnold (Shaun Sipos), and Dano Royale (Alejandro Rae). While on the road, Kimberly makes note of some unusual things, but she doesn’t think anything of it. Later on, on the road you see some other drivers, including Evan Lewis (David Paetkau) who had previously won the lottery, who is the first. Along the way there is Kat Jennings (Keegan Connor Tracy), Eugene Dix (Terrence C. Carson), Rory Peters (Jonathan Cherry), Isabella Hudson (Justina Machado), Tim Carpenter (James Kirk), Nora Carpenter (Lynda Boyd), and police officer Thomas Burke (Michael Landes).

I’m not going to spoil everything, so I’ll just say that there is a horrible accident, and everyone dies. Or do they? No they don’t, because it is only a vision that Kimberly has. Just like in the first movie, terrified of what she saw, she does not leave the intersection to go onto the highway. Further along similar to the first movie, everyone that died in the vision start dying in gruesome ways in real life.

Pros: near the end, it is revealed that the lives of all of the characters have some way or another intertwined which is really interesting to learn. Also the main character from the first movie Clear Rivers (Ali Larter) is in this one which is sad and nice at the same time.

Cons: some of the deaths are sad because I sort of got attached to some of the characters

Final Take: On my horror fanatic movie scale I rate Final Destination 2 with 95/100 spine-chiller points. I definitely feel that this one was more thought out then the first, and it had a lot of moving pieces. I recommend this movie if you are looking for a chilling, intense, mind wrenching movie where the deaths scarier and the plot is crazier!

That’s all for this review! Tune in next time for another horror movie review on Prime Time Horror…