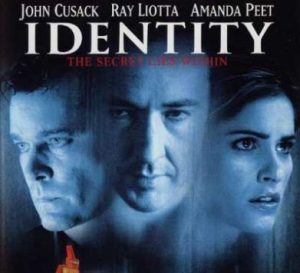 IDENTITY  is a recently viewed favorite of mine. This movie makes me so happy! Mostly because John Cusack is in it… I mean come on it’s John Cusack! So I told my dad that I wanted to watch a movie where there are people in a hotel room who get murdered. He pulled up this movie, and let me just say HOLY CRAP IT’S GOOD!

It’s about these people that are stuck going to a motel since all of the roads are flooded in a massive storm. First it starts out with a man named Malcolm Rivers (Pruitt Taylor Vince.) Then you have limo driver Ed Dakota (John Cusack) driving the rich and “famous” Caroline Suzanne (Rebecca De Mornay.) Next there is the motel manager Larry Washington (John Hawk). The other people that come are a family with mother Alice York (Leila Kenzle), dad George York (John C. McGinley), and their son Timmy York (Bret Loehr.) A lady named Paris (Amanda Peet), a couple Lou (William Lee Scott) and Ginny (Clea DuVall.) Lastly, police officer Rhodes (Ray Liotta) and the criminal he is escorting, Robert Maine (Jake Busey). The storm required Rhodes to stop at the motel, which necessitated him chaining up Maine to one of the motel toilets. The rest of this movie centers on the characters trying not to die because there is a murderer on the loose, and it ends with an epic plot twist.

Pros: the ending you don’t see coming, at all. The contrasting characters work perfectly together. And of course there’s John Cusack.

Cons: things can get a little confusing in the end but if you pay attention to the plot line it’s easy to figure out

Final Take: On my horror fanatic movie scale I rate Identity with a 94/100 spine-chiller points. I recommend this movie if you’re looking for a good “thinking” horror movie with great actors/actresses and a huge plot twisting end.

That is all for this review of Identity. Tune in next time for another horror movie review on PRIME TIME HORROR…